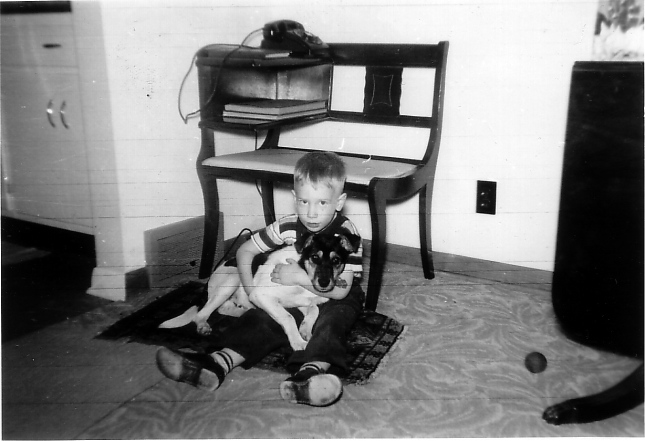 Buddies Phil and Pat sharing a moment together. This photo was taken in about 1953, not long before Pat "ran away."

Sometime in the early 1950s my parents and I left a second-floor apartment on Grand Avenue and moved to a new house at 2422 Dugan Court in Davenport.

Before long I had a pet dog named Pat. Pat was a playful, rambunctious, black and white, medium-sized dog. Perhaps he was a spaniel. I really don’t know; kids don’t care about details like that.

Pat was a handful from Day One. My folks had not yet fenced their back yard, so Pat had to be on a chain when outside. When he escaped, which he seemed to do quite often, he went absolutely wild.

One day I was playing with some toy trucks when Pat made an escape. He grabbed one of my trucks and took off running down the block with it, crossing busy Lincoln Avenue.

I complained to my mother, who hurried after Pat and tried to bring the truck — and Pat — back home.

But Pat would have nothing to do with it. This was a big game for him. Like dogs do he’d crouch down and wait for Mom to get close, then he’d take off.

I don’t believe I got my truck back that day until Pat was darned good and ready to return it. Then, since it was made of rubber, it had his teeth marks in it.

He was well fed, but once he apparently chewed on some small pieces of concrete he’d found and swallowed them. We know this because we watched as one by one he threw them up.

Once Pat got away and was gone overnight. I was worried about him. He’d never been gone that long.

The next morning he came slowly limping home, leaving bloody paw prints with each step. We didn’t know where he’d been, but he obviously had walked through a lot of broken glass and had cut all of his paws. I don’t remember if my folks took Pat to the vet or if Mom, a nurse, bandaged his paws.

It would have been late summer or fall of 1953 when Pat “escaped” yet again. But this time he didn’t come back.

My parents told me he had run away. Perhaps he had found a new home, they suggested. They said not to worry — they were sure he was fine.

Pat did, indeed, have a new home. The Humane Society.

Years later my parents confessed that Dad had dropped Pat off there on his way to work. I’m sure that hadn’t been easy for Dad. Even though Pat was what I’d call a “high-maintenance” dog, we all loved him.

When the truth came out about what had happened to Pat, Mom and Dad explained to me that she had been pregnant at the time with my brother.

And they were afraid the rambunctious pet would wrap his chain around her ankle and cause her to fall, endangering the baby.

So they had made up the story about Pat running away because they thought that would be easier for me to accept than the truth.

As a teen, I gave them some flack now and then about how they had deceived me. But in my heart I understood why they had done what they did. I might have done the same thing, had I been in their shoes.

I don’t know if I ever told them, but I forgave them for taking Pat away.

Posted by frontporchexpressions on March 29, 2009 in Uncategorized

Supporting our troops with beef sticks 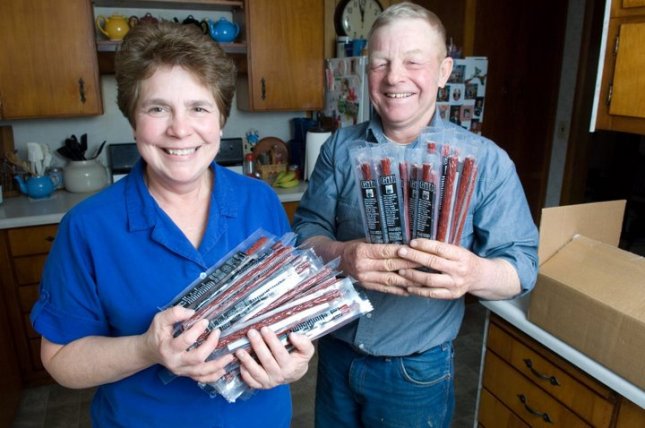 They call her the Beef Stick Lady. And that’s just fine with Dee Ann Paulsrud who, with her husband Ted, farms east of Danbury. That’s in west central Iowa.

For the last two years, Paulsrud has run the Beef ‘n’ Up the Troops program. That’s where people donate money to buy Iowa-made beef sticks that are shipped as a gift from home to Iowa National Guard troops deployed overseas.

The Iowa Cattlemen’s Foundation actually started the program when the War on Terror began in 2002. Late in 2006, when the foundation discontinued Beef ‘n’ Up the Troops, donations of $75,000 — 10 times the original goal — had paid for 15 shipments totaling 3.5 tons of more than 100,000 beef sticks to troops.

Dee Ann Paulsrud says the Cattlemen aborted the program because they could no longer “donate the time and the staff and so forth. It does take a lot of time.”

When the decision to drop Beef ‘n’ Up the Troops was made, she says, Ted Paulsrud was retiring from two terms as District 7 director to the Iowa Cattlemen’s Association. “He was aware that they were going to abort the project. And he wasn’t a happy boy.”

That’s when Dee Ann decided to take up the initiative. Why?

For people like her husband, who served in the National Guard in the Viet Nam era, and her father, who was a second lieutenant in World War II.

“My dad was gone from home for over four years from training to being over in Europe. He made it home and, therefore, there’s me,” Paulsrud says.

Beef ‘n’ Up the Troops was “just something I could do with the phone, the computer and my kitchen table. But it has gone beyond my kitchen. I have actually gone out and done some speaking. But it’s all about the soldiers, it’s not about me.”

What’s in it for her?

“The satisfaction is, my dad would have loved to get something like this. As much as anything, I may do it out of respect and honor to my dad. My dad died young. He was 60 when he died.”

Her volunteer effort takes a lot of time and effort but “the benefits have been that we’ve gotten to know a lot of people across our great state.”

Since the Paulsruds are beef producers, people had some questions for Dee Ann when she became the Beef Stick Lady.

Was there profit in this initiative for her? Did she create a job for herself?

“No, there’s not a profit. No, the beef does not come from our farm,” she says. “And yes, I did create a job, but everything I do is donated. And there are lots of unsung heroes, people who’ve helped us along the way.”

One of them is Scott County farmer Gerald Boldt of rural Davenport, a vocal supporter of Beef ‘n’ Up the Troops.

“I really believe this is something I had a need to do,” he says. “I have donated several times in the past few years, and I am proud to have been part of the Cattlemen’s effort to help Dee Ann.”

Boldt is referring to the Scott County Cattlemen’s Association. He recently sought donations from members at their annual banquet. Their contribution allowed Paulsrud to order 4,000 beef sticks instead of the 3,000 she had planned to order. That took her over the 60,000 beef stick mark since she’s been running the program.

The nine-inch sticks are processed at Source Verified Foods in Ackley, Iowa, at 69 cents each when ordered 3,000 at a time. Then they are shipped to Sioux City free of charge via Fareway Food Stores trucks to the 187th Air Refueling Wing of the Iowa Air National Guard, which flies them at no charge to the troops.

“Each stick is vacuum packed in heavy plastic,” Boldt says, “with a ‘Cattlemen Care’ logo and a message that says they are a gift from friends in Iowa. They have a shelf life of 14 months, even in hot conditions.”

The Paulsruds enjoy doing something nice for the deployed troops. But last August appreciative troops did something in return for them. And it was a huge surprise.

The 185th Air Refueling Wing sent the couple an American flag that had flown on a KC-135R Stratotanker, an aerial refueling tanker aircraft, over Afghanistan, Tajikistan and Kyrgyzstan on a combat mission supporting Operation Enduring Freedom. It came with a certificate of authenticity and a letter of thanks signed by the soldiers.

When they opened the package, “both of us got the biggest lump in our throats, and we both had tears in our eyes,” Dee Ann Paulsrud recalls.

“And I said, ‘We’re doing this for the soldiers, they’re protecting our freedom and they’re taking the time to do that back.’ It meant the world.”

So Paulsrud keeps raising money — any amount folks want to give — and ordering and shipping more beef sticks. It’s a passion for her.

“The more I can get the story out, the more people want to contribute,” she says. “I just keep putting the money in the checking account until there’s enough, then I order more sticks.”

Boldt says he hopes people will donate to “help put a smile on a soldier’s face, even if it’s just for a moment. A moment can be can be a long time when you are away from home doing your duty like they are for us.”

Posted by frontporchexpressions on March 29, 2009 in Uncategorized