RSS
← A football fix for a football addict
A sad day for Midwest racing: Checkered flag waves for WDRL →

It’s time to fall for winter 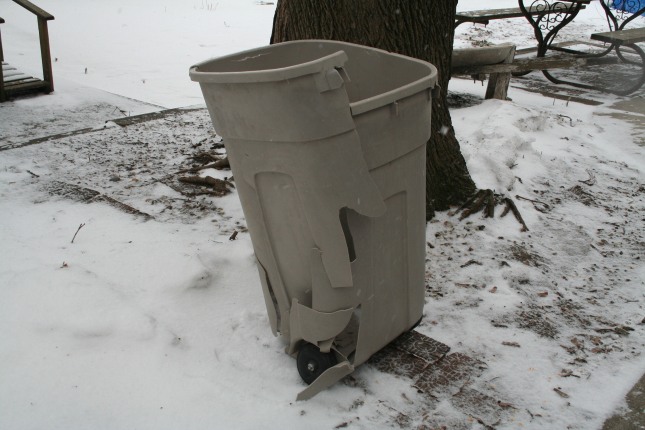 The can that cushioned my can.

Yes, I know. The calendar tells us it’s been winter for a while now. But it’s officially winter for me because I’ve taken my annual winter tumble.

I’m a fairly careful guy when it comes to walking and climbing. But even so I usually fall about once a year, and that’s often during the winter months. Ice — especially ice that I’m not aware of — is my undoing.

For spectacular, I don’t expect to top my impromptu plunge from a two-story roof while trying to clear an iced-up chimney during a blizzard on Christmas Eve in 1983. That’s part of the Roberts family lore now. And people who claim they’re my friends still refer to me as “snow angel” at times.

As for humorous, there’s the cornflakes incident, which also took place in the ’80s.

I worked in the office at the former Caterpillar plant in Davenport at the time, and on the winter morning in question, I was running late for work.

I had the ill-conceived idea that I’d finish my half-eaten bowl of cornflakes on the way to the car. What I didn’t realize, though, as I kissed my wife good-bye at the door and headed out was that there had been a heavy frost overnight, and the front steps were quite slippery.

My feet went out from under me, and I tumbled down the steps. In the process, I lost control of the bowl of cereal. It went up in the air, above my head, and turned upside down.

I wasn’t hurt, other than my pride, but milk and cornflakes found their way to my hair, shirt and necktie.

My wife had been watching this circus act from the front door. When I came to rest, I looked back at her. And to her credit, she had kept a straight face. That is, until she saw milk and cornflakes dripping from my glasses. Then she lost it.

My fall from grace that marks the official arrival of winter 2009-2010 was neither spectacular nor overly humorous. But it was memorable.

I was carrying an empty plastic garbage can from the street to the back yard when my feet found a large, snow-covered patch of ice near a downspout.

I did a triple half gainer, landing partially on my back and partially on the garbage can, which cushioned the impact. You might say that can saved my can.

When you take a tumble like that, providing you had no advance warning it was going to take place, the first thing that happens after you thump back to Earth is you think, “What the heck just happened?”

You obviously figure that out pretty quickly, given the fact you’re suddenly lying on your back staring at the clouds and it’s not a good day for sun bathing.

Next you determine whether or not you’re hurt.

If you aren’t — and this is most important of all — you look around to see who might have witnessed your lack of gracefulness.

I survived my most recent fall. I wasn’t seriously hurt, and no one saw what happened. The garbage can? It’s a goner.

Copyright 2010 by Phil Roberts, Creative Enterprises. This column has been submitted to The North Scott Press, Eldridge, Iowa.

Posted by frontporchexpressions on January 27, 2010 in Uncategorized

← A football fix for a football addict
A sad day for Midwest racing: Checkered flag waves for WDRL →