Thanks SFR for the Tod Brinkman Memorial Award 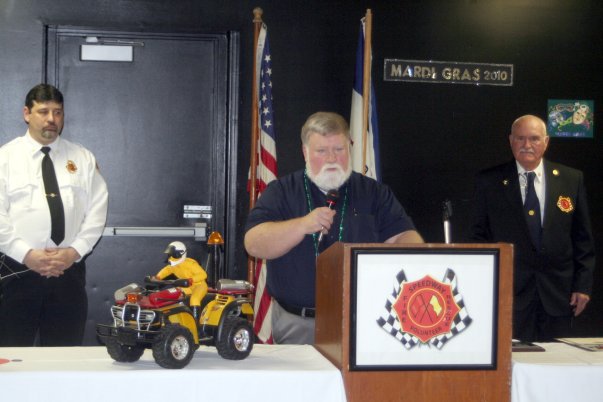 My thank-you speech as SFR Board president Scott Bohannon (left) and founder and Chief Gil Short look on. (Picture This Photos) 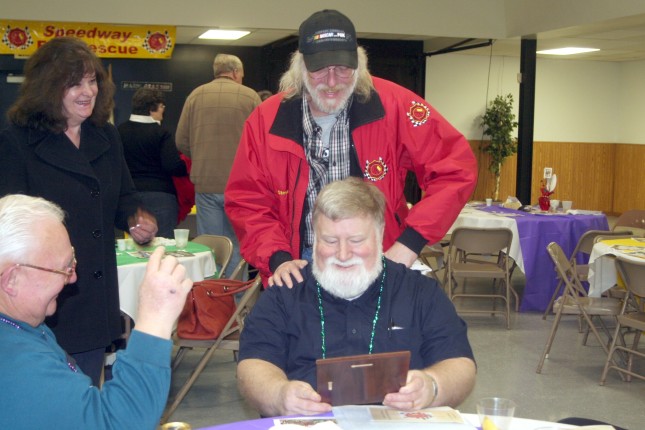 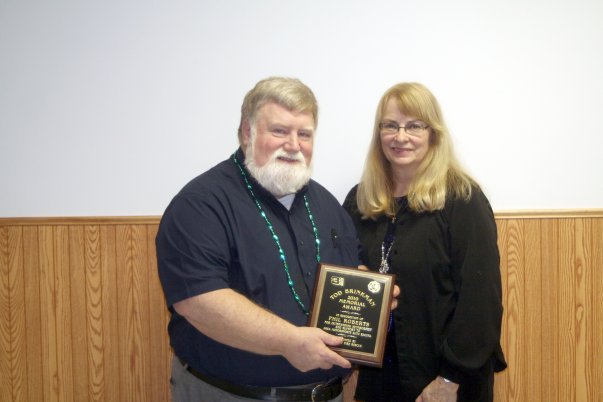 With my wife Sherry. (Picture This Photos)

My heartfelt thanks go out to Speedway Fire-Rescue of the Quad-Cities for naming me the 2010 recipient of the Tod Brinkman Memorial Award last Saturday night (Feb. 20) at their annual awards banquet at the Mississippi Valley Fairgrounds in Davenport, Iowa.

I have long supported SFR in many ways and have been an honorary member since 1995. I emceed their banquet Saturday like I do each year.

The Brinkman Award goes annually to someone who has been a longtime supporter of motorsports. Each year’s award winner is a surprise until the award is presented, so I was shocked to hear my name called.

Steve Donovan and Rick Stone, who co-hosted the “Around the Track” program until a couple of years ago on a Davenport radio station, originated the Tod Brinkman Memorial Award in honor of their late friend.

Tod was a Quad-Cities Late Model race driver who died suddenly on March 5, 2003, of a medical problem at the too-young age of 36. A copy of his obituary follows. It will give you a real sense of who Tod was and why he is so fondly remembered and missed by so many.

SFR, whose members themselves received the Brinkman Award in 2007 from Donovan and Stone, have taken over presenting it annually since “Around the Track” went off the air. But Steve Donovan was at the banquet Saturday, said I was deserving and congratulated me. That meant a lot.

I’m as proud as can be of receiving the award. People who work in motorsports aren’t accustomed to winning awards from racers. This season will mark my 35th consecutive season of announcing weekly races and writing about racers in trade papers and publications like Late Model Illustrated, Stock Car Racing, FasTrack and NASCAR Magazine. In all those years, my only other award of note was the Quad-Cities Racing Connection’s 2001 Oscar Award for “outstanding support and contribution to auto racing.” So the Brinkman Award is special.

I’m afraid I rambled a bit Saturday in my thank-you speech. But here are several points I hope I made:

1) Race drivers and their crews are wonderful people. I count many of them among my most treasured friends. While drivers are quite competitive on the speedway, most are very kind and even generous when they’re not behind the wheel. Many times I’ve seen drivers loan one of their spare engines to another driver against whom they’re competing in a tight points battle so the driver with the blown engine doesn’t have to park his car for the night.

2) The volunteers of Speedway Fire-Rescue are a trained, dedicated group of people who provide a valuable service — risking their own well-being to keep everyone safe at the race track — and they do it for free. How great is that? I’m honored to be in their company.

3) There is no finer honor than being recognized by your peers. Thank you!

Like I later joked with some folks Saturday night, I’m not sure I deserve the Tod Brinkman Memorial Award. But I’m not giving it back!

Burial is in Riverside Cemetery, Moline. Visitation is 3 to 8 p.m. today at the funeral home. Memorials may be made to Quad City Animal Welfare Center or A-1 Fire and Rescue (now known as Speedway Firer-Rescue).

God called Tod into heaven on Wednesday, March 5, 2003, when he died suddenly at Trinity Medical Center, Rock Island, with his loving family by his side.

Tod William Brinkman was born June 29, 1966, in Moline, the son of William and Rosalie Erickson Brinkman. He married Susan Gnatovich on March 7, 2000, in Las Vegas, Nev.

Tod was a man with unyielding talents, a fun loving, energetic, caring generous man. Among his favorite lines were, “There was not anybody I cannot get along with” and “It doesn’t have to be this hard.” His bright light is now shining in heaven, and he will be greatly missed and never forgotten by so many.

He was a talented, avid golfer, a member of Pinnacle Golf Club, and traveled the world as a professional caddy on the PGA Tour from 1987 to 1995. He loved to race the late-model dirt-track circuit, traveling to many tracks. NASCAR was his life — he never missed a race, and was a Daytona 500 enthusiast.

He was a member of Davenport Moose Lodge 28, where he was looking forward to working with the Special Olympics. He was a devoted Iowa Hawkeye and Pittsburgh Steelers fan. He loved spending time with his friends. He especially enjoyed indoor go-karting with Derek and Denny. He loved when his Grandma Violet made him his special pancakes, and he loved music, dancing, sports, shoes, and a good haircut.

Tod is survived by his wife, Susan; his parents, Bill and Rosalie; brothers, Kyle, Smyrna, Ga., and Scot and his wife, Kelly, Rock Island; grandparents, Hiram and Violet Erickson, Moline; uncle and aunt, Randy and Cindy Erickson; and cousins, Kristy and Lynsy Erickson. Tod was preceded in death by his lovely sister, Wendy, and his beloved grandparents, Elmer and Dorothea Brinkman.

Posted by frontporchexpressions on February 24, 2010 in Uncategorized