A surprise for Krista Voda from Joe Taylor of the QCSC. 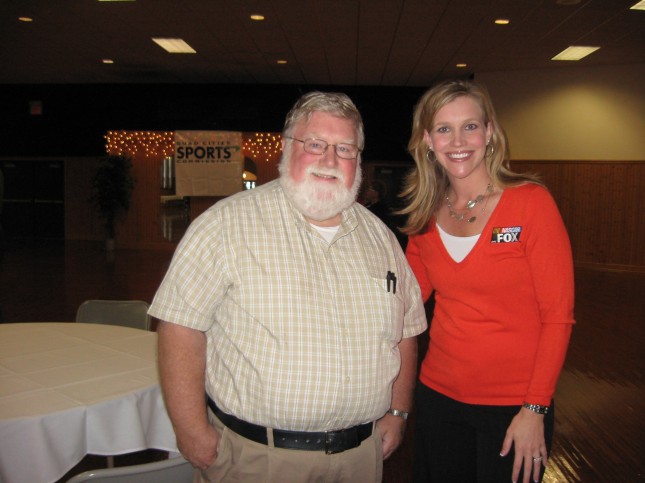 As seen in the first two photos above, Joe Taylor of the Quad Cities Sports Commission surprised Clinton, Iowa, native Krista Voda with an award today (Sept. 13, 2011) at a luncheon celebrating the 15th anniversary of the commission.

Krista was the keynote speaker at the luncheon, held at the Mississippi Valley Fairgrounds’ Starlite Ballroom in Davenport.

Krista has covered racing extensively for cable TV’s Speed channel and has worked as a pit reporter for NASCAR races seen on FOX and FX.

She also has done sidelines reporting from televised football games.

From humble beginnings in local broadcasting, she became the first woman to host a NASCAR pre-race show on television and, earlier this year, was named one of the Top 10 most influential women in NASCAR.

She spoke about her rise to national TV prominence and shared some interesting behind-the-scenes stories from her work.

Taylor noted that Voda has likely presented her share of trophies the last few years but probably has not received any.

So the commission remedied that.

I am shown with Krista in the third photo.

Posted by frontporchexpressions on September 13, 2011 in Uncategorized