Note: My favorite travel website is tripadvisor.com, where I file an occasional review. One follows…

We stayed at the Sheraton Minneapolis Midtown Hotel, a Starwood property, in November 2011 because it is the only hotel near our final destination.

It’s in a neighborhood where, for your own safety, you won’t want to stray very far on foot at night. But the benefit of the property is that it’s centrally located, partway between downtown Minneapolis and south Minneapolis.

We found our room to be modern, clean and comfortable, just what you’d expect at a Sheraton. Employees were friendly. My request for a first-floor room was honored. Sheraton Minneapolis Midtown Hotel is not cheap, but we took advantage of an online special called Better Tomorrows. We stayed two nights in a room that had a king-size bed, big-screen TV and large work area. The first night was at the regular price of $129 plus tax. The second night was 40 percent off, $77 plus tax. There is a large parking lot right outside the main door, but you’ll pay about $8 per day for using it.

Next to the hotel, across a short stretch of Elliot Avenue South in a former Sears store, is Global Market (midtownglobalmarket.org). Take time to walk through it.

And, no, I couldn’t bring myself to try a camel burger.

Posted by frontporchexpressions on November 21, 2011 in Uncategorized

The WOC Club is a group of former employees of WOC AM-FM-TV (or, later, KWQC-TV and KIIK-FM or KUUL-FM) who meet monthly for breakfast and to share “war stories.” I have written about this group on this site before. You can do a search and read more.

Those in this “club” worked in all aspects of radio and TV. I, for example, did radio news on WOC-AM from 1997-2009. Others, too, were news anchors. Some were program hosts, directors, set builders and who knows what else.

Some of us left ‘OC for better jobs. Some of us were fired. And some of us retired. But we all have one thing in common — WOC/KWQC is a beloved part of our personal history.

You never know who might show up at a WOC Club meeting. Today, at the November 2011 gathering, Ernie Mimms (known by many now-grown-up “kids” as Uncle Ernie or, later, Captain Ernie) made an infrequent appearance. Thanks, Ern. Come back soon.

Showing up for his inaugural WOC Club appearance was WOC alum Doug Dahlgren, who went on to several larger markets but now is retired and living in Chicago.

Doug started in radio as a teen. If I was listening carefully, I believe I heard him say his first radio job was at KCLN in Clinton, Iowa. Then it was on to WOC-AM in Davenport as the afternoon drive deejay.

From there, according to http://www.440.com/namesd.html, Doug Dahlgren’s resume went like this:

A note from Doug on the site says, “I’m retired and living in Chicago again. The Aberdeen, Washington, station you list (KAYO-FM) was actually in Olympia, with a local signal into Seattle; the city of license at the time was Aberdeen; it became a Bustos Media station in 2005 and since none of us spoke Spanish … well, you know…”

It was a pleasure meeting this well-traveled radio personality, and we hope Doug Dahlgren returns to our group of merry men and women. Thanks to Dave Coopman for taking and supplying the accompanying photographs of Doug and others.

Posted by frontporchexpressions on November 15, 2011 in Uncategorized

On Veterans Day, I’ll be thinking of my father, First Sgt. Ray Roberts (1920-2004), who enlisted in the Army at the start of WWII, served in the infantry in the European Theater and was wounded twice, earning the Purple Heart. He is pictured above, top.

I am named for his respected friend and company commander, Capt. Philip Ingraham, pictured above, bottom. He was killed in action July 4, 1944. As communications sergeant, my dad had worked at Capt. Ingraham’s side.

In his WWII memoir, which he wrote for his grandchildren, my dad wrote of Capt. Ingraham, “I had seen many guys killed, but when he went down, it really hit me very hard. He was so close that Phil was named after Capt. Ingraham.”

To his dying day, my dad never again celebrated the Fourth of July.

Posted by frontporchexpressions on November 11, 2011 in Uncategorized

Imagine catching a glimpse of this some night in a darkened room you thought was empty. Phil Roberts photo.

My wife Sherry has a death wish — for me.

Not really, but sometimes I do wonder. Here are some true stories to prove my point.

To say I don’t like snakes is putting it mildly. Our boys, when they still lived at home, had a realistic looking, 3-foot long rubber snake they played with. But I think Sherry got as much enjoyment out of it as they did.

Once I was walking through our garden and came upon the rubber snake at my feet, coiled among some plants. My heart nearly stopped. That was my wife’s handy work. Another time she had the snake hanging from a low branch in our maple tree in the back yard. Again, my heart went pitter-patter when I nearly walked into it, and she just laughed.

I’m also not a fan of rodents or spiders, and I can’t tell you how many times I’ve found a rubber mouse or spider on some route that I’m known to walk.

Then there was that shadow in the bedroom. In the early ‘80s, I came home and found that Sherry had already retired for the night. So I quietly slipped into our bedroom, which was lit only by a night light, so as not to wake her.

In the darkness, I could see her form in bed. Then, to my horror, out of the corner of my eye, I also saw the form of someone else sitting, not moving, in a chair in the room!

My heart pounding, I turned on the overhead light. What I found was a 6-foot tall, stuffed, pink rabbit Sherry had acquired. She had put the rabbit in the chair to get my attention. It certainly did.

The most recent incident occurred last night. I’m a night owl, and Sherry was in bed fast asleep as I headed to our bedroom after midnight. As I passed by it, I glanced into one of our darkened spare bedrooms and stopped dead in my tracks. I could make out the form of someone lying on his back in bed!

Again, my adrenaline flowed. I flipped on the bedroom light only to find a smiling, 5-foot scarecrow all stretched out. He’d been part of our Halloween decorations and was waiting to be carried to the attic for storage.

He could have been placed in a box or folded up and placed on the bed in a heap. But that obviously would not have won the desired result — to scare the life out of Phil.

I really don’t know why I go the doctor for annual physicals. I know I have a strong heart. My wife helps me prove it regularly. 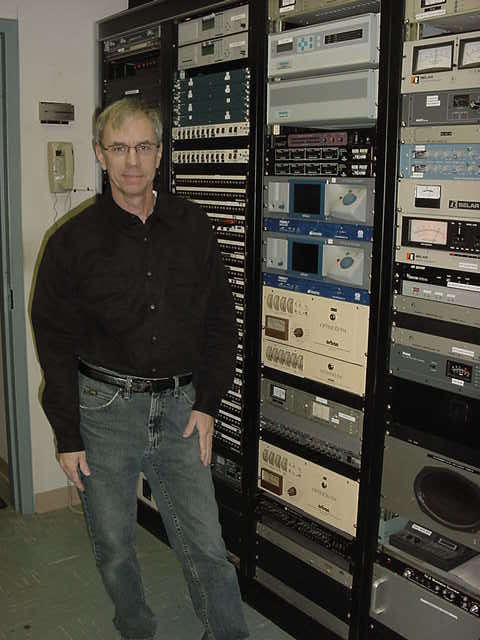 Anyone want to hire some experienced radio veterans?

The four guys pictured together above represent the final news team that worked at WOC and the five other Quad-City Radio Group stations in Davenport, owned by Clear Channel. At one time, QCRG had five or six full-time news people.

Joined by former QCRG engineer Jon Book, also pictured above in a file photo taken in the QCRG tech room, the radio veterans gathered for breakfast Nov. 1, 2011, at the Village Inn on Elmore Avenue in Davenport to chat about old times and recent events in broadcasting.

James, who was a news anchor/reporter, left QCRG in November 2006 to take a news director job at a station in Milwaukee. He left that station in June 2007 to become the news director of Nebraska Radio Network in Lincoln. He returned to the Quad-Cities in June of 2011 to continue his college education.

Roberts, a news anchor/reporter, was released by Clear Channel on April 28, 2009, and is now semi-retired, doing media-related work on a part-time or freelance basis.

Book, the engineer, was released Dec. 10, 2010, and is looking for employment opportunities.

Minnick, a news director/anchor, was released Feb. 15, 2011, and is currently retired.

Linberg, a news anchor/reporter, was released Oct. 26, 2011, and is considering his future employment options. 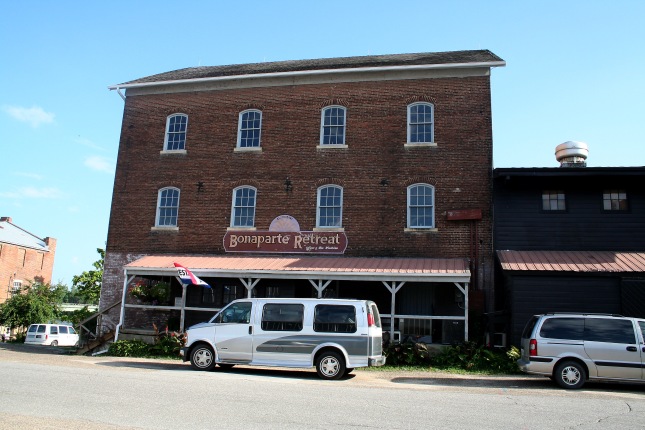 Bonaparte Retreat (bonaparteretreat.com) is a delightful restaurant located in the former Meek’s Grist Mill on the banks of the Des Moines River in tiny Bonaparte, Iowa.

The historic mill building, constructed in 1878, replaced an 1836 structure that burned down in 1841.

Bonaparte Retreat is a casual place, and the authentic mill decor is a plus — some tables offer a view of the river — but the best part is the food.

It’s open for lunch or dinner seven days a week. We always go at dinnertime, and I order their specialty, a huge ribeye steak that covers much of my plate. I’m a big guy, but I always end up taking some steak with me in a “doggie” bag.

My wife prefers a seafood platter they serve. That’s also a bonus for my belly. One of the items on her platter is fried oysters. She doesn’t care for oysters, but I love them. So I am the lucky recipient of her oysters. Yum!

In addition to a salad and potato, dinners include a cup of homemade soup and croutons plus some pan-fried bread. You certainly won’t leave hungry.

Prices are reasonable, too, considering the amount of food.

With the possible exception of the Scenic Drive Festival, which draws huge numbers of people to the county and to the restaurant, service is good.

Allow some time, too, to walk the downtown area, which deservedly is on the National Register of Historic Places.

Our favorite store is the new Burns Gallery & Tea Emporium (burnsgalleryandtea.com), where you can sip on a cup of their custom-blended tea and purchase artwork and tea to take home.

Posted by frontporchexpressions on November 1, 2011 in Uncategorized