It was a great IBNA convention 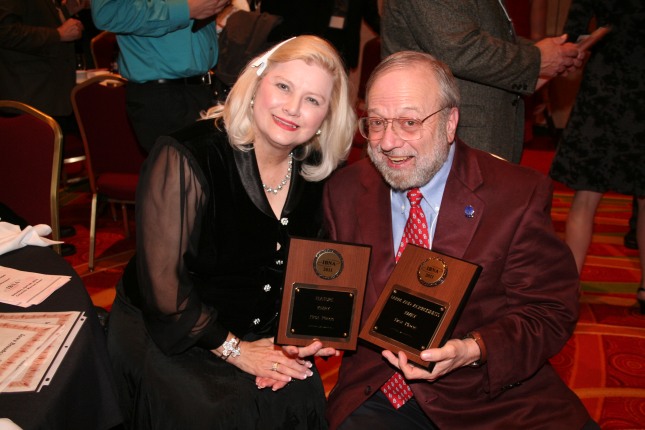 Thanks, too, to IBNA members for re-electing me to their Board of Directors as their Southeast Iowa representative. I was on the board earlier — in fact I’m a past IBNA president — but left in May 2009 when my one-year term ended. That was just a few weeks after I had been released from my news anchor/reporter job at WOC-AM in Davenport, Iowa, due to station owner Clear Channel’s sorry financial state.

(Incidentally, WOC, the area’s only “news/talk” station, once had as many as six news people. Now, aside from a rip-and-read part-timer in the morning, there are none! The “local” news comes from WHO-AM, a Clear Channel station in Des Moines. A sad state of affairs…)

It was a pleasure finally meeting Mike Grimm, our luncheon speaker at the convention. Mike is formerly of WMT, Cedar Rapids, then KMOX, St. Louis, and now is the voice of the Minnesota Golden Gophers.

When I handled media relations (1990-2001) for NASCAR’s Midwest-based All-Star Series, I provided racing news and results to Mike and his WMT boss, Ron Gonder. But we’d never met until Saturday.

I also had the pleasure at lunch of sitting next to Wayne Freedman, a workshop presenter and our evening awards banquet keynote speaker.

He is a fabled, many times award-winning San Francisco TV reporter — a great storyteller. He also produced features at one time for CBS News.

At dinner, Cary J. and Jean Hahn, two of my favorite people, joined me. Cary and I are roughly the same age, share Missouri roots and have been through good times and bad times in broadcasting, a profession we both love. A former Shelley Award winner, Cary is the news director at KMRY-AM in Cedar Rapids.

Thanks to IBNA executive director Jeff Stein of William Penn University and everyone else for a meaningful convention. See you April 20, 2013, in Johnston, Iowa!

Posted by frontporchexpressions on May 2, 2012 in Uncategorized