Dinner theater in New Era: What’s not to love? 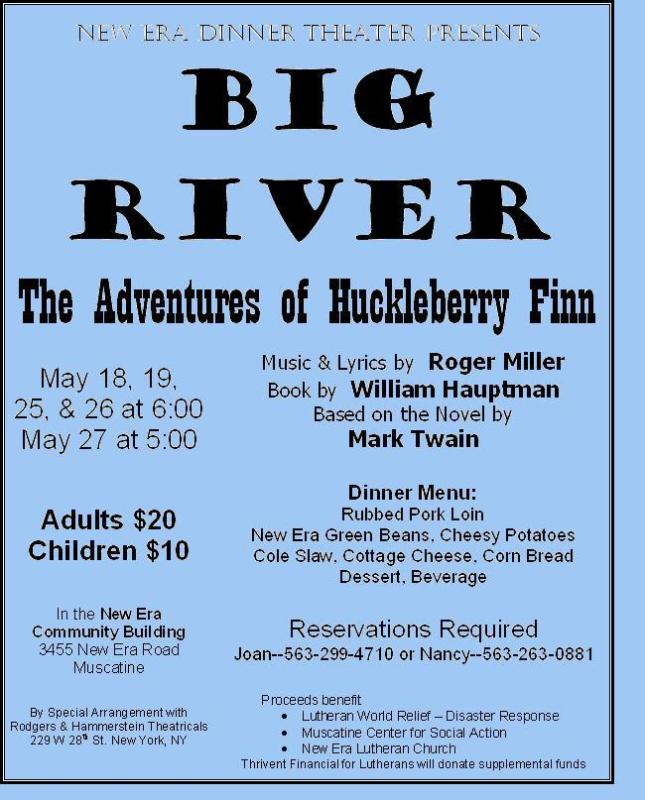 Not much happens in tiny New Era, Iowa, located just a short distance from the south entrance to Wildcat Den State Park in Muscatine County.

That’s appropriate; there’s really not much there. Just a few houses and a large old community hall that’s connected by a newer social hall to the picturesque New Era Lutheran Church.

At dusk, the deer that wander out of the woods might well outnumber the people of New Era.

There is one time, though, that New Era comes to life. That’s in May each year at a dinner theater hosted by the church.

Guests sit down to a home-cooked meal in the social hall, then they move to the community hall to watch their friends and neighbors in a performance. It’s been an annual tradition since 1994. Proceeds go to charity.

This year’s show is a musical, “Big River: the Adventures of Huckleberry Finn,” featuring the music of Roger Miller. And church member Bill Turner, 56, of Muscatine, returns for the 14th time as director after acting in four early New Era productions.

Turner and his wife, Mary Maxson, are happy to be transplanted Chicagoans. He was raised west of the Windy City but came to love this area while attending Augustana College,

After graduation, Turner worked in downtown Chicago for three years. But he and his wife decided they didn’t want to raise a family in the city or the suburbs.

“So we came back to the Quad-Cities area,” he says, “and I got a job at Bandag and have been there ever since.”

He is a business analyst at the company, now owned by Bridgestone.
The couple have three children, Adam, Aaron and Kari. Adam and Kari are part of the “Big River” cast.

Turner did some theater in high school but wasn’t involved as an adult until Adam, his oldest son and in middle school at the time, auditioned for a community theater part.

Turner drove the boy to the audition.

“They talked me into auditioning at the same time. I got a big part, and the rest is history,” Turner says with a laugh.

Though he didn’t take part in New Era’s first production, “Godspell,” in 1994, Turner won the part of Jesus the next year in “Cotton Patch Gospel.” He then acted in plays the next three years before the director left, and he took that job.

“I said I’d try it, and it went pretty well,” he says of directing. He hasn’t returned to the New Era stage except to sing in plays’ choruses several times.

That includes the cast, the costumes and the set and “trying to hold it all together. But there’s also a high level of satisfaction being director, to come up with a vision for the show and get to see it be played out.”

How does he deal with cast members who are worried about forgetting their lines?

“I just tell them that they are well prepared, to trust what they have been doing in rehearsals and to go out and have fun.”

As a patron who has attended every production except the first one, I can tell you they do just that – have fun.

Posted by frontporchexpressions on May 3, 2012 in Uncategorized