A high time in the Low Country

At the World of Coca-Cola, two fellow passengers “enjoy a Coke” with its inventor, John Pemberton.

There was lots to see at the Georgia Aquarium. 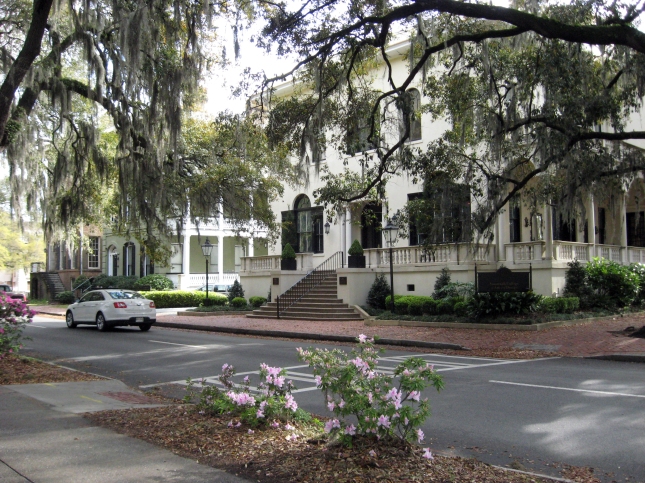 Chad, our waiter at the Pirates’ House restaurant in Savannah was efficient but comical.

I enjoyed a visit to Savannah Candy Kitchen.

At the Magnolia Plantation in Charleston, S.C., a tram took us past former slave quarters. 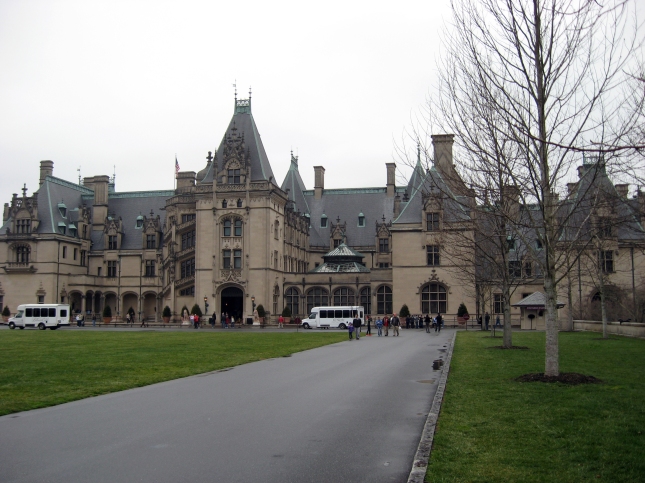 A tour of the 250-room Biltmore Estate was a highlight of Asheville, N.C.

Our driver, Al Ruggles, did a great job driving us home through a Midwest snowstorm. This was taken at an Indiana rest area.

A reporter and columnist tends to make observations and take notes as he or she goes through life, even while on vacation. So I was busy last month doing just that — observing and noting — as my wife Sherry and I toured a portion of the southeast United States known as the Low Country on a 10-day, nine-night Plus60/Burlington Trailways, in conjunction with Ginny Howell Tours, bus trip.

We stayed in Clarksville, Tenn., the first night and Louisville, Ky., the final night. In between, we visited the cities of Atlanta and Savannah in Georgia; Charleston, S. C.; and Asheville, N. C.

Some people prefer flying to their vacation destination, then renting a car. But flying is such a hassle that I’d rather drive if time allows or, better yet, go by bus and let someone else do the driving.

There are many advantages to a bus trip. As a passenger, you can sit back and enjoy the view or take a snooze while the driver deals with traffic, parking and the luggage. Tour guides at each major destination climb onto the bus and tell you about that destination. These are local people who know what they’re talking about. Sometimes they lead you on walking tours. In the four cities we visited, our tour guides spent multiple days with us, showing us the attractions.

Following are some random notes from our trip:

— Most of our time in Atlanta was spent in the downtown area, where we toured the World of Coca-Cola and Georgia Aquarium, which are right across the street from Centennial Olympic Park, which commemorates that event. We drove by Turner Field, named for Ted Turner and home of the Atlanta Braves. And we made a brief stop at the Martin Luther King Historic Site. Atlanta is where a pharmacist invented Coca-Cola. At the Coca-Cola exhibit, one of the highlights was getting to sample a range of 60 products the company makes and sells all around the world. To us, some were tasty, and some were not. At the King site, Dr. and Mrs. King’s tomb is on a brick island in a reflecting pool. Nearby are the original Ebenezer Baptist Church, where King and his father pastored, and King’s boyhood home.

— A Paris newspaper called Savannah “the most beautiful city in America.” It may well deserve that title; it is filled with stunning old homes and nearly two dozen, tree-shaded town squares. City Market is an entertainment and shopping district housed in historic buildings. One of the businesses there is Byrd Cookie Co., where there are always free samples.

— Charleston is another beautiful city. Fort Sumter, where the first engagement of the Civil War took place in 1861, is unchanged from the end of the war and is a national monument. It’s on an island at the entrance to Charleston harbor, and we sailed by it on a boat cruise. Our tour visited the modest Magnolia Plantation and gardens along the riverfront. Most memorable there was a tram ride past former slave quarters and some ponds where turtles and alligators were sunning themselves.

— Asheville’s main claim to fame is the 250-room Biltmore Estate, a French Renaissance-style mansion that’s open to the public. The tour will take you at least an hour and a half and you’ll see just a fraction of the rooms, but it’s worth the visit. Along with Elvis’ Graceland and the White House, Biltmore is among the country’s most visited houses.

— The step-on tour guides were outgoing and well informed, as you might expect. They also were often comical. The guide from Atlanta, a woman, explained the difference between “Yankee” and “damned Yankee.”  She said a Yankee is a northerner who visits the south. A damned Yankee, she said, is a Yankee who visits the South and stays. She said she is married to a damned Yankee. The woman guide from Savannah and the guide from Charleston, a man, both indicated there is a good-natured rivalry between Georgia and South Carolina. The man from Charleston joked that the state of Georgia was designed to stop the riff-raff from Florida from making it to South Carolina. Someone also asked him if the word “pecan” is pronounced pee-can or puh-kahn. He said it’s a puh-kahn, that a pee can is a container put under the bed at night.

— We stayed often at what I call “pointed toilet paper hotels.” Over the years, I have observed — accurately or not — that the finer hotels obviously instruct their maids, when preparing rooms, to fold the end of the toilet paper roll so that it makes a point. I guess that’s supposed to make the lowly toilet paper look a little more classy. Or perhaps the arrow points out to patrons of questionable intelligence which way to pull on the paper to use it.

— The second day of our trip, at a rest area on a Sunday morning in Monteagle, Tenn., it was 70 degrees or so and sunny with daffodils in bloom. We enjoyed two or three days of great weather before the temperature turned cold, a reminder of home. Our last day, March 25, was spent driving home through a Midwest snowstorm.

— I enjoy sweetened iced tea and, when I order it at restaurants around here, I generally have to add my own sweetener. But “sweet tea” is a staple at many southern restaurants. In fact, when one of our fellow bus passengers wanted unsweetened tea at a restaurant, she asked for “regular tea” and the waiter responded, “Down here, regular tea is sweet tea.”

— Grits remain a popular southern food and were served with several dinners. One of the more unique dishes and quite tasty was shrimp served in buttery grits.

— We enjoyed some fine meals served at unique restaurants, but I noted that many of them don’t put spoons on the table. They provide you with just a fork and a knife. Is there a spoon shortage that I’m unaware of?

— You won’t find any tall buildings in downtown Savannah. Our tour guide said there is a rule that no buildings can be higher than a certain church spire in town. She also said many of Savannah’s buildings are haunted, particularly the former tobacco warehouses along River Street, where slaves were locked up to guard the tobacco and often died because of poor living conditions.

— Charleston Tea Plantation was an interesting place to visit. Because of the right amount of rain, heat and humidity, it is the only place where tea leaves are grown in America. Part of our visit there included a ride around the facility in a well-used trolley that had been purchased from the city of Philadelphia. The driver, who was named John Kennedy, explained the southern lifestyle. In the morning, he told us, “we start out slow, then we taper off.”

— Another of our more interesting places to visit was Baxter Village, a planned community in Fort Mill, S. C., where we had dinner at an Irish pub. The construction and the community are new. But all of the houses and the commercial buildings, which hold shops and restaurants, look like they are from the ’20s and ’30s. So it’s a collection of new buildings meant to look old, and it’s really impressive. You can take a video tour at the villageofbaxter.com.

— At one of our two Charleston area hotels, the Hilton Garden Inn in Rock Hill, S.C., the manager on duty met our bus on arrival, stepped on board to welcome us and rolled out a red carpet for us. That was a nice touch.

— Our breakfasts on the trip were the complimentary ones served by each hotel we stayed at, and lunches were on our own, usually at fast food restaurants. But our dinners, which were excellent and usually included in the price of the trip, were served at very unique places.

— At Mary Mac’s Tea Room in Atlanta, I got brave and tried cooked collard greens, which were on the buffet. They were very good, so I bought a Mary Mac’s cookbook that contained the recipe, and we’ve since had collard greens at home. While tasty, they will never replace the three basic food groups: meat, potatoes and dessert.

— The Pirates House Restaurant in Savannah, located a block from the Savannah River, had at one time been an inn and gathering place for pirates and sailors. The restaurant website says, “In the chamber known as the Captain’s Room … negotiations were made by shorthanded ships’ masters to shanghai unwary seamen to complete their crews. Stories still persist of a tunnel extending from the old rum cellar beneath the Captain’s Room to the river through which these men were carried, drugged and unconscious, to ships waiting in the harbor.”

— The KingFish Restaurant on the Ohio River in Louisville has a seafood combination dinner that rivals the one served at one of my all-time favorite restaurants, Down the Hatch at Ponce Inlet, Fla. There’s also a peaceful river view.

— My wife is more daring in the technology field than I am. She owns two items I don’t have, a smart phone that accesses e-mail and the Internet, and a tablet that does the same. I was forced to learn how to use her tablet on our trip so I could check my e-mail. That’s because I took a small laptop computer with me but forgot to take its charger. It worked just two days before the battery died.

Copyright 2013 by Phil Roberts, Creative Enterprises. This piece submitted as a column to The North Scott Press.

Posted by frontporchexpressions on April 8, 2013 in Uncategorized