A large honor for an old racing announcer

The 2016 inductees. This appeared in a QCS program and on a banner that hangs at the speedway. 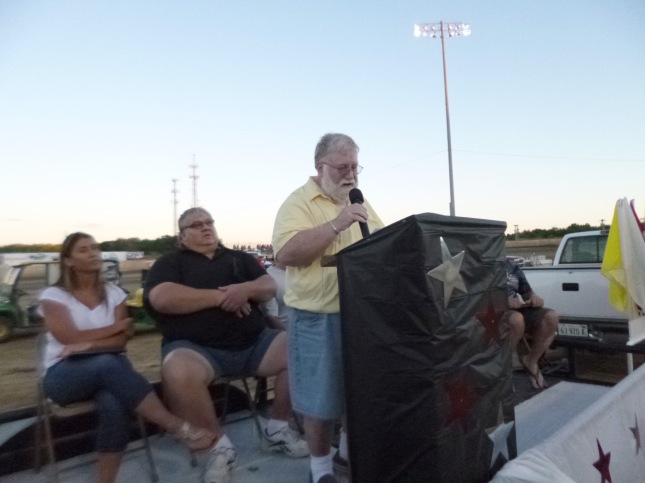 Sherry took this photo of me at the podium. I loved being a racing announcer but don’t particularly care to be in the spotlight myself.

I received a large honor Sunday night, Aug. 21, 2016, at Quad City Speedway in East Moline, Ill. I was one of seven people inducted into the track’s Racing Hall of Fame for contributions made to auto racing. Following is a paragraph from an article that later appeared in the Moline Dispatch and Rock Island Argus:

Following is the acceptance speech I read:

I grew up near Davenport Speedway.
I don’t think a young man in the 1950s and early 1960s could grow up near a speedway and not be drawn by the sound of those racing engines.
My buddies and I didn’t have access to smart phones or computers or color television sets that picked up scores of channels.
For fun, we rode our bicycles, built AMT model cars and, when we were old enough, sat together at the speedway on race nights to cheer for our favorite drivers – our heroes.
Some of my buddies wanted to grow up to become race drivers. You may recognize the name of one of them who succeeded in doing so – Gary Webb.
I, on the other hand, wanted to be a racing announcer.
And thanks to determination and some lucky breaks, I was able to achieve that. I did it for 40 years before deciding to hang up the microphone.
I also was the host of an auto racing news program on radio, an auto racing publicist and a freelance writer of racing articles.
Being involved in racing has been a wonderful experience. I met some wonderful people – drivers, crew members, promoters, officials, sponsors and spectators. That included many of the racing heroes I had cheered for as a youngster.
What I miss most about not being actively involved in racing now is seeing these people on a regular basis.
I am honored and appreciative of being included in the Hall of Fame.
But I would like to dedicate this honor to my wife, Sherry, who has supported me in my racing-related endeavors.
For many years, when our family was young, she stayed home raising our four children while I announced races anywhere and everywhere two and three nights a week.
Thank you, Sherry. And thanks to all of you for supporting the best sport in the world, auto racing.

Posted by frontporchexpressions on August 23, 2016 in Uncategorized