A fascination with trains 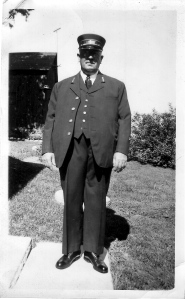 I’ve always been more than a little interested in trains.

Maybe that’s because the railroad is in my blood. My grandfather on my mother’s side, Benjamin T. Miller (1882-1963), spent much of his life working for the railroad.

As his obituary in the Hannibal (Mo.) Courier-Post puts it, “He began working for the Chicago, Burlington and Quincy Railroad in 1899 at age 17 as a water boy on a section gang working out of Peruque (Mo.). He was promoted to brakeman on September 21, 1906, making his first run on No. 3 out of Hannibal to Quincy; on October 14, 1914 he was made extra freight conductor and on January 3, 1931 was promoted to passenger conductor, a position he held until his retirement on June 6, 1947, his 65th birthday. For the last four years of his career he was conductor on the Mark Twain and Rocket Zephyr between St. Louis and Burlington.”

I remember only two of my Grandpa Ben’s railroad stories. One was about a train he was on that was going uphill when it broke in two at the center, sending the back half downhill as runaway cars.

The other was about a passenger train that made a stop at a depot on a very hot day. One passenger, a man, got off and spied a bucket of water on the loading dock. He bent over, put his head in it to cool off and died instantly.

Maybe I like trains because of my once- or twice-a-year visits when I was a kid to my Uncle Ralph’s barber shop in Hannibal. Ralph, Ben’s son, rented space in a small building across the street from the train station.

The building that housed the shop, long gone now, probably because it flooded regularly, was a small green stucco structure with white-painted trim. It was scrunched between the banks of Bear Creek and several sets of tracks that went to the train station.

The building was maybe 20 feet wide. A cafe or beauty shop — the tenant changed regularly — occupied the side of the building next to the creek, and the barber shop was right next to the tracks. My dad took my brother Bruce and me to Uncle Ralph’s barber shop whenever we were in town.

All three of us would get haircuts to help Uncle Ralph’s finances. He’d probably been a busy barber when the railroad was booming, but that was no longer the case when we’d visit him in the 1960s. Most of his customers by then were retirees. He’d cut their hair as long as they were alive, then he’d give them a final trim at the funeral home when they died. Ralph always tried to give our haircuts to us free, but dad always made him take the money.

I remember the interior of the shop well. Waiting customers sat in sturdy wooden chairs with their backs to the wall nearest the tracks. Looking straight ahead there were two ancient black, white and chrome barber chairs, but there was never a second barber. Only Ralph, who had barely enough business to survive himself.

Each barber chair had a strap hanging on it for sharpening the straightedge razor Ralph used on sideburns and the back of the neck. Behind Ralph was a long counter holding a variety of clippers, combs and bottles of hair tonic, all reflecting in a long mirror.

In the ceiling were schoolhouse-type lights, never turned on because they weren’t needed during the day, and original Hunter ceiling fans still in working order. An old Regulator clock hung on a wall with a calendar.

Toward the back of the building, next to the line of chairs that waiting customers occupied, was an antique rolltop desk that eventually became a victim of a flood. A short flight of steps led down to a back door and a lean-to against the back of the building. It was in there that with Ralph’s permission hobos, who had perhaps been riding the rails, spent the night after he had slipped them a few bucks for food.

What I remember most, though, about Uncle Ralph’s shop was the nearly constant train traffic by it as the diesel engines and freight cars pulled slowly into or out of the station. First you’d hear the ding-ding-ding of the bell out front, warning motorists of the train’s approach. I’m sure there were no crossing gates.

Then as the engines pulled alongside the shop, the wall near them, the floor and the chairs vibrated. It was noisy, too, making conversation difficult.

The constant trains were old hat to our uncle the barber. But for a couple of kids from Iowa who lived quite a distance from any train tracks, it was an eerie, magical feeling, knowing that each train that passed was not more than 4 feet or so from our backs, separated only by the wall of the building. We’d sit for a moment in the chairs and vibrate with them, then we’d hurry to the picture windows at the front of the shop to watch.

Posted by frontporchexpressions on September 18, 2009 in Uncategorized